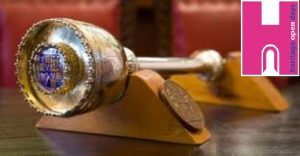 A rare chance to view the Mayor’s Parlour, Council Chamber and the civic silver with other historic items including portraits of John Rastrick and Cuthbert Collingwood.

The current Mayor and former Mayors will be on hand to guide you around the collection of civic silver in the Mayor’s Parlour of this Grade II listed building originally built in 1714 by Vanburgh for the Earl of Carlisle. After a fire in 1869, it was rebuilt with a facsimile facade by R J Johnson.

Morpeth’s treasures also include the silver mace from 1604 – the oldest working civic mace in the country, cannon balls from the 1644 siege of Morpeth Castle and the Town Hutch from 1513. Also the scold’s bridle (or ‘branks’) which was given to gossips or scolding wives.

Access: There is both lift and stair access to Mayor’s Parlour and Council Chamber which are on the 1st floor of the Town Hall building.