Amongst the many treasures in the Town Hall, there is a wooden case containing a medal, a logbook and WWII RAF insignia on the wall of the Council Chamber. The label says:
“This Distinguished Flying Medal was awarded to Flight Sergeant Charles Fairbairn on 8th May 1945 by King George VI. Presented to Castle Morpeth Borough Council on 20th February 1984 by his widow Mrs Violet Fairbairn“. 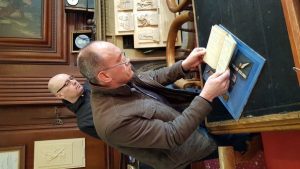 When entertaining visiting groups, someone will occasionally ask about the medal but we have never been able to give them say more information than is stated on the label. So, in the spirit of ‘we will remember them‘, I decided to find out more about the history of this Morpeth serviceman.

As a member of local history pages on Facebook, I had often been fascinated by biographies and photographs of long dead servicemen, researched from the starting point of the inscriptions on their gravestones, by amateur historian Peter Hastie. I asked Peter to find out more about Charles Fairbairn and he didn’t disappoint!

Charles, known as Charlie, Fairbairn was born on 20th July 1917, the son of John Robert and Julia Fairbairn (nee Littledyke) of Hollon Street in Morpeth. Charlie was a joiner in 1939. He joined the Royal Air Force Volunteer Reserve in 1940 and was a Wireless Operator/Air Gunner, No. 1078762.

Originally posted to 12 Squadron, No.1 Group, RAF Bomber Command at RAF Wickenby, he flew in Wellington Bombers until the creation of 626 Squadron in November 1943 formed with two flights of eight aircraft. Its first operation was to bomb the Western entrance to the Montcenis Tunnel in the French Alps on the 10th of November 1943. 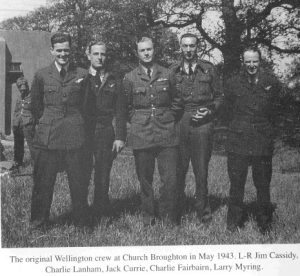 After completing his tour, 30 missions, with 12 and 626 Squadrons, he was posted to 83 Operational Training Unit, RAF Peplow (Childs Ercall) on 17th February 1944, probably as an instructor. He received his Distinguished Flying Medal from King George VI on Tuesday 8th May 1945 (Victory in Europe Day).

Bomber Command aircrews suffered a high casualty rate: of a total of 125,000 aircrew, 57,205 were killed (a 46 percent death rate), a further 8,403 were wounded in action and 9,838 became prisoners of war. Therefore, a total of 75,446 airmen (60 percent of all operational airmen) were killed, wounded or taken prisoner. A memorial in Green Park in London was unveiled by the Queen on 28 June 2012 to highlight the heavy casualties suffered by the aircrews during the war.

After the war Charlie worked for the Morpeth Corporation and married Violet Short in 1952. They had no children. They lived at 25 Olympia Gardens, Morpeth. Charlie died in 1983 and Violet in 2003.

The medal and medal ribbons are: Distinguished Flying Medal, 1939-45 Star, Air Crew Europe Star (with rosette which signifies award of bar, either Atlantic, or most likely, France and Germany) and Defence Medal (probably eligible through his Operational Training Unit post).

After taking advice from Woodhorn Museums and receiving permission from Charlie Fairbairn’s nephew, Gordon, we opened the case so that Peter could read the logbook. Hidden inside we also found a newspaper cutting about his award of the Distinguished Flying Medal, his RAF Flying Clothing Card and his invitation to Buckingham Palace! 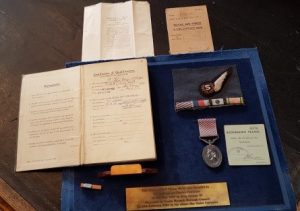 The old, wooden medal case has now be replaced with a smart, new and airtight case and returned to display in the council chamber.

One thought on “The Mystery of the Medal!”