Alison Byard writes about the family who gave their name to Olivers Mill:

A few months ago, I was reminded that two portraits used to hang over the staircase at the Old Cottage Hospital, which trustees of the Hollon Trust thought might have been Richard and Mary Hollon.

We decided to ask Northumbria Healthcare Trust what became of these portraits after the Cottage Hospital closed. We got a response fairly quickly, including photos of the paintings, which turned out to be not Richard and Mary Hollon, but Robert Oliver, and his wife Margaret Scott Oliver, of Messrs Oliver Ltd, bakers and confectioners in Bridge Street and the Market Place and owners of Wansbeck Flour Mills, now known as Olivers Mill. The Olivers were generous donors to the early Cottage Hospital in Bullers Green. 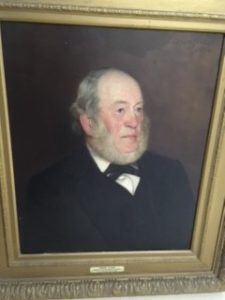 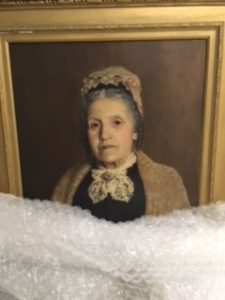 The paintings were originally a gift to the Olivers from their three sons (John, Robert and William) on the occasion of their Golden Wedding Anniversary in 1894. They were presented to the Cottage Hospital when the 1939 extension was opened by their grandson Mr C G Hudson, in memory of the great contribution made by his grandparents. The Olivers’ son John had also bequeathed a large part of his estate to the hospital.

The artist is Thomas Bowman Garvie (1859 – 1944), also a Morpeth man, who lived at Bow Villa in Newgate Street. He was a fine painter and some of whose other work can be seen in the Town Hall – including his painting ‘Man feeding his Cat’ [1] in the Council Chamber, and the portraits of George Barron Grey and George Young in his mayoral robes on the staircase. Garvie subsequently moved to Rothbury where he was much employed by Lord Armstrong in painting portraits of his family, which can be seen at Cragside.

[1] We now think the portrait of the old bearded man with his cat, in the Council Chamber, may be of the artist’s father, Edmund Garvie.

2 thoughts on “The Oliver Family”